Path to citizenship at City College

Path to citizenship goes through

City College for many in SF 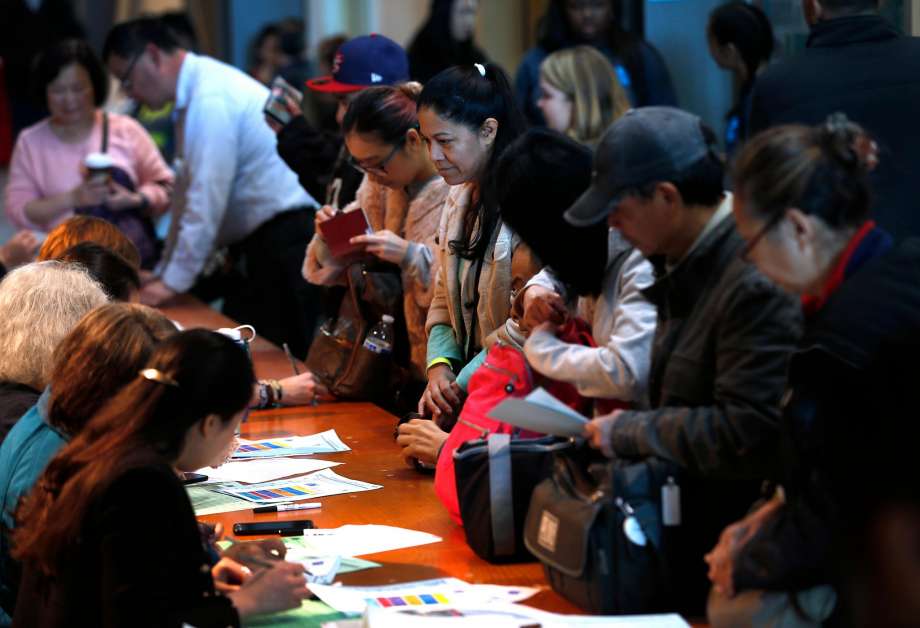 The path to citizenship for Baudelio Burciaga began 12 years ago when, at 19 years old, he left Zacatecas, Mexico, for Oakland, seeking political asylum as a gay man.

Five years ago, he got a green card. Saturday, he stood outside a City College of San Francisco classroom holding a completed naturalization form, ready to submit it after one final review.

“I’ve been waiting … for this day,” Burciaga said.

He was one of more than 150 people who attended the free citizenship workshop hosted by the SF Pathways to Citizenship Initiative to assist those navigating the costly and sometimes complicated route to becoming a U.S. citizen.

The city’s Office of Civic Engagement and Immigrant Affairs funds the workshop, which takes applicants through a four- to five-step process that lasts at least two hours. People often arrive early in the morning before the event begins, said Adrienne Pon, executive director of the immigrant affairs office.

“All these good people coming here sometimes stand in line for hours,” Pon said. “They’re so eager to become citizens.”

Volunteers set up rooms at City College’s Multiuse Building to serve as different stations for each leg of the process. Translators on site offered help in the most common languages applicants use: Mandarin, Cantonese, Spanish, Tagalog, Arabic, Vietnamese and Russian.

After registration, applicants go through screening to determine whether they meet basic eligibility requirements — like holding a green card for at least five years. If anything complicates their case, they meet with attorneys for one-on-one consultations. If not, they go straight to filling out a 21-page N-400 naturalization form.

The form takes at least an hour to complete and costs about $780 to file, said Jamie Richardson, a spokeswoman for the city’s immigration affairs office. People on public benefits are eligible for a fee waiver, but the steep price still deters many people from applying, she said.

Those who opt to complete the form at the workshop have the application reviewed by attorneys offering pro bono services at the event, then volunteers help them send it off to U.S. Citizenship and Immigration Services. It takes from six months to a year for the agency to process the forms.

“A lot of folks don’t know how complicated naturalization and the immigration system is,” Richardson said. “It’s an intimidating process.”

Mayor Mark Farrell stopped by, walking through each station and shaking hands with volunteers as he asked about their work. Farrell said he has vivid memories of his mom, a German immigrant, taking her naturalization oath around the time he graduated from college.

“Our city is made up of immigrants,” he said. “Especially in the face of the anti-immigrant rhetoric we see coming out of Washington, D.C., now it’s so important, I think, — as leaders, as volunteers, as professionals on the ground — that we emphasize that San Francisco will stay strong and stand with our immigrant community.”

This particular workshop has run for five years, and sometimes the people who obtain citizenship afterward come back to lend a hand.

Raymund Borres, now a workshop volunteer, earned his citizenship after going through the workshop himself. He said he started volunteering to familiarize himself with the process before applying for citizenship four or five years ago. Now, he keeps coming back to help others fill out forms and help translate for fellow natives of the Philippines.

“You feel grateful and you want to give back,” he said.

Everyone has their own journey to citizenship. For himself and his wife, he said, it took 20 years to get a green card, all in the hopes of reuniting with his father-in-law, a World War II vet living in San Francisco who was feeling lonely without his children. They moved to San Francisco six years ago. By the time they received citizenship, his wife’s father was in his 90s, Borres said.

It was his wife’s dream to move to America to be with her father again, Borres said, so it became his dream, too.

“There’s a story behind each person that finally takes the oath,” he said. “It’s a final milestone of a really long journey.”