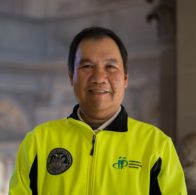 “There’s a story behind each person that finally takes the oath. It’s a final milestone of a really long journey.”

Raymund, a workshop volunteer, earned his citizenship after going through the workshop himself. Raymund started volunteering to familiarize himself with the process before applying for citizenship four or five years ago. Now, he keeps coming back to help others fill out forms and help interpret for fellow natives of the Philippines.

“You feel grateful and you want to give back,” he said.

Everyone has their own journey to citizenship. For Raymund and his wife, it took 20 years to get a green card, all in the hopes of reuniting with his father-in-law, a World War II veteran living in San Francisco who was feeling lonely without his children. They moved to San Francisco six years ago. By the time they received citizenship, his wife’s father was in his 90s, he said.

“It was her [his wife’s] dream to move to America to be with her father again, so it became my his dream, too. There’s a story behind each person that finally takes the oath,” he said.

“It’s a final milestone of a really long journey.”